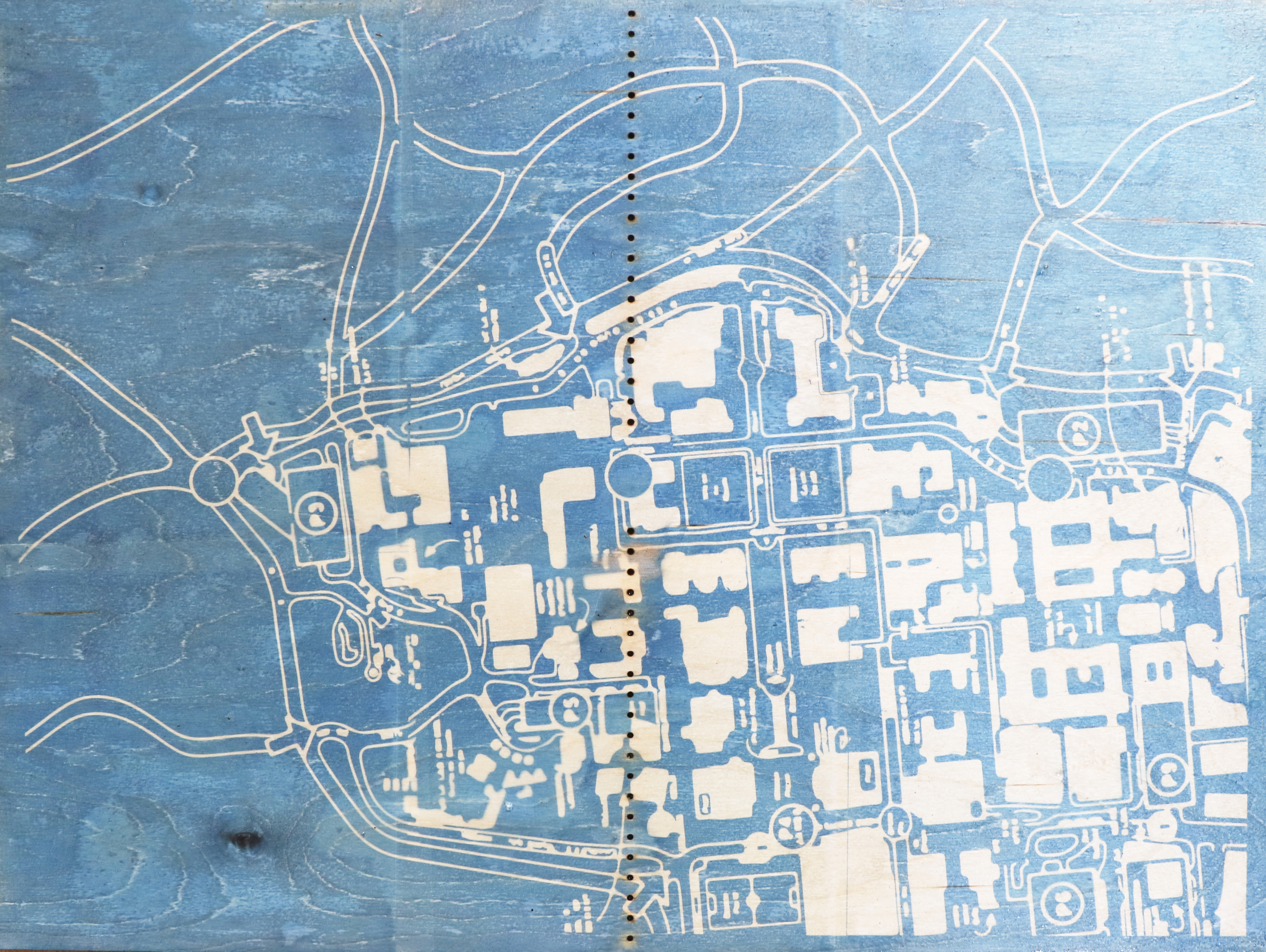 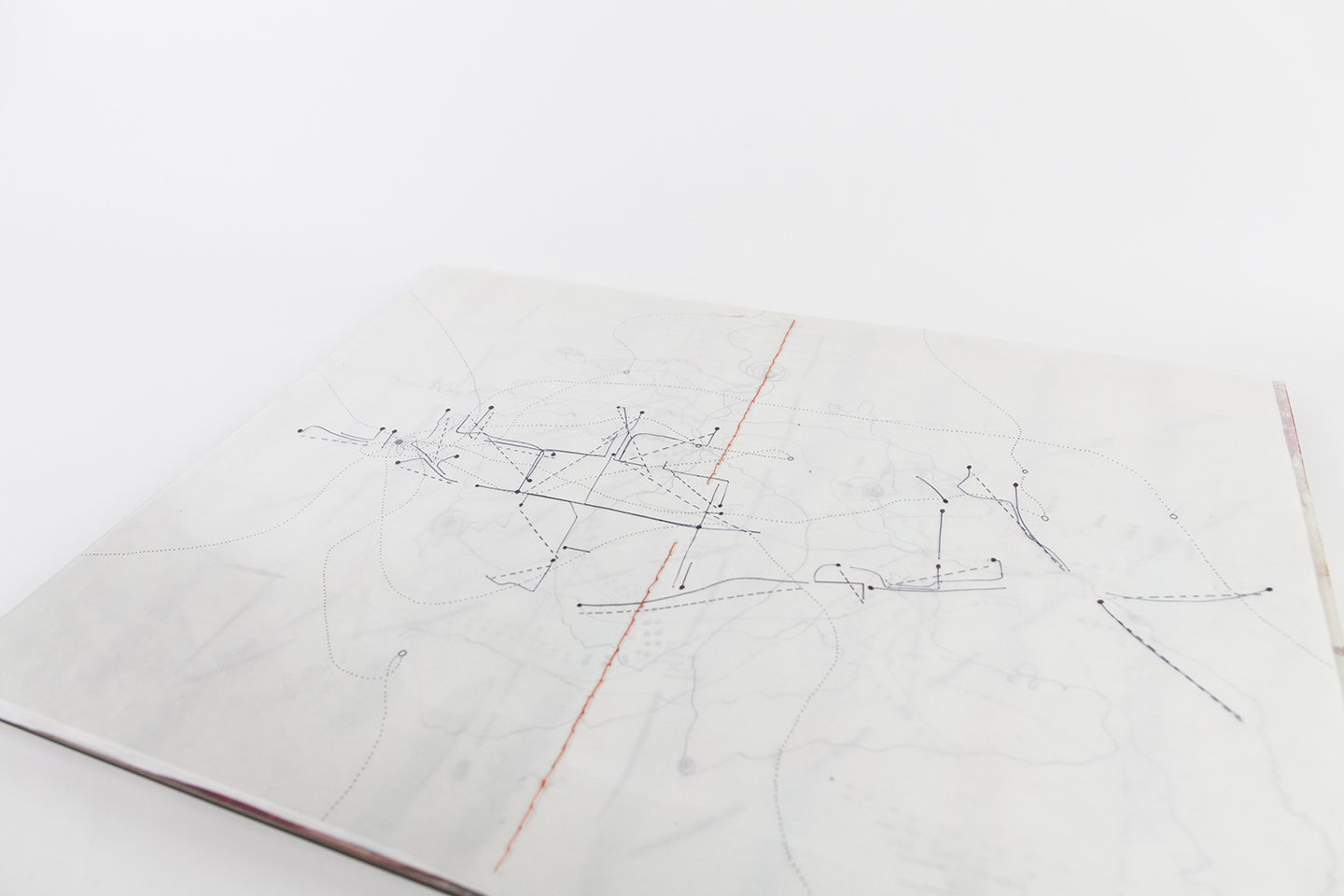 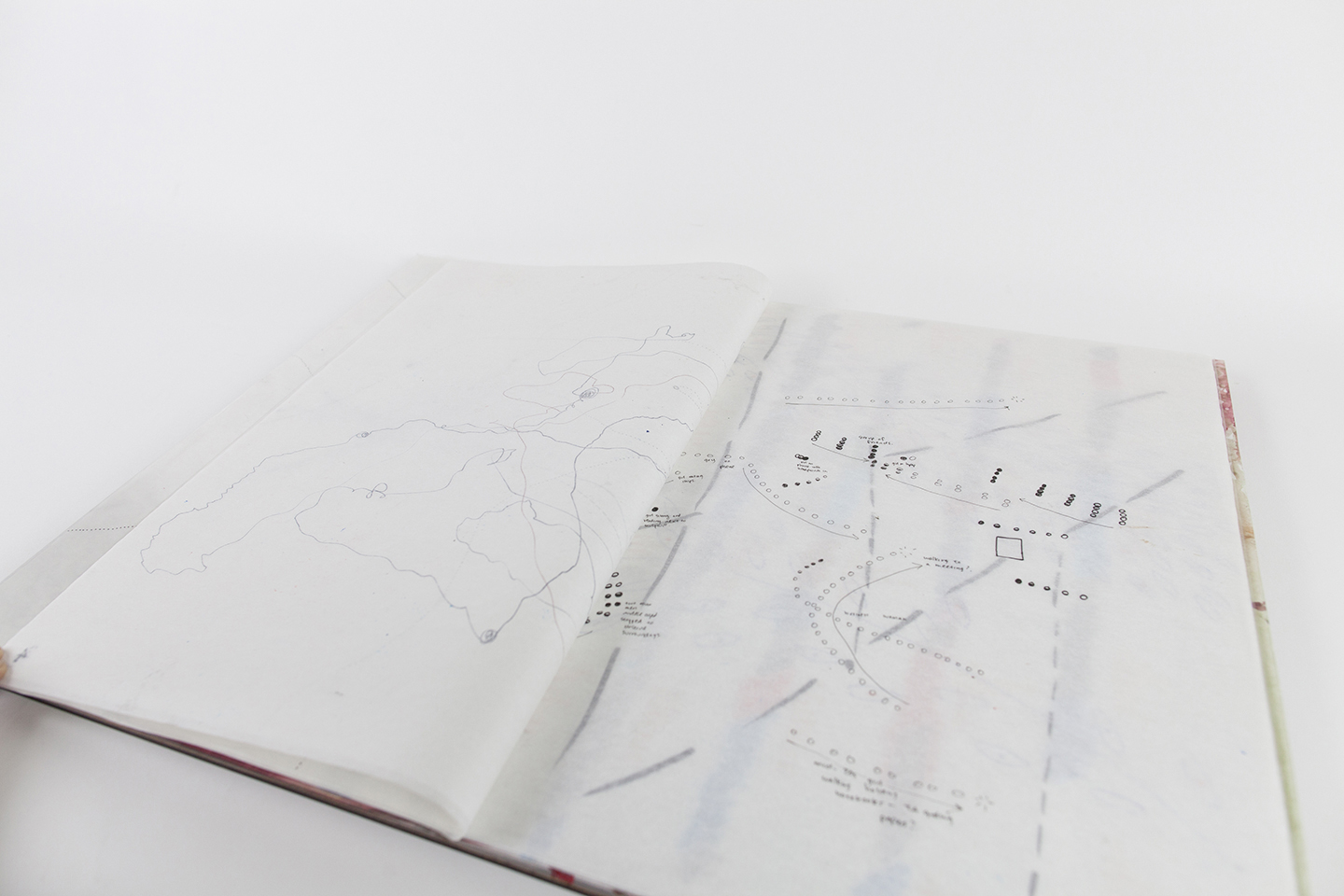 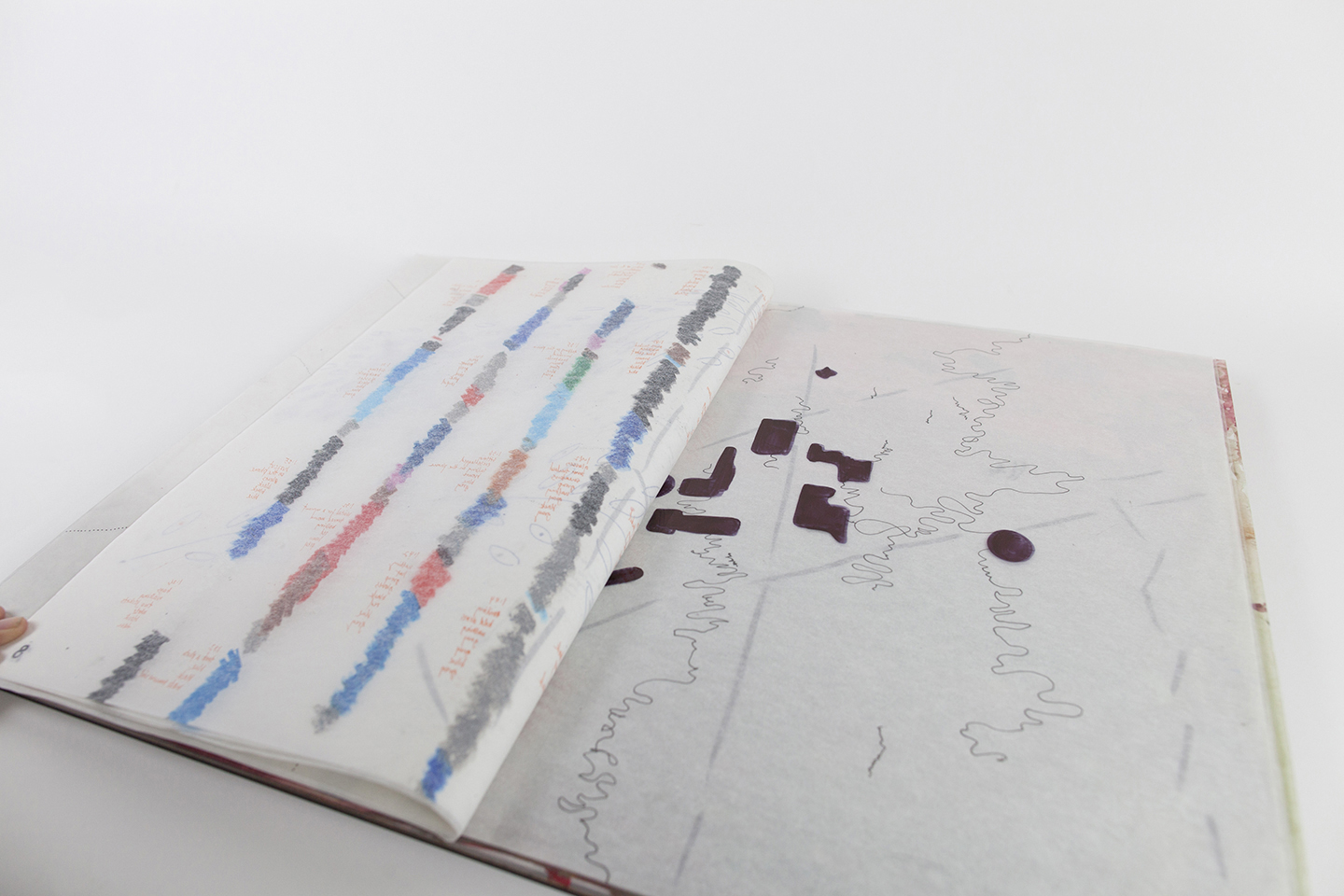 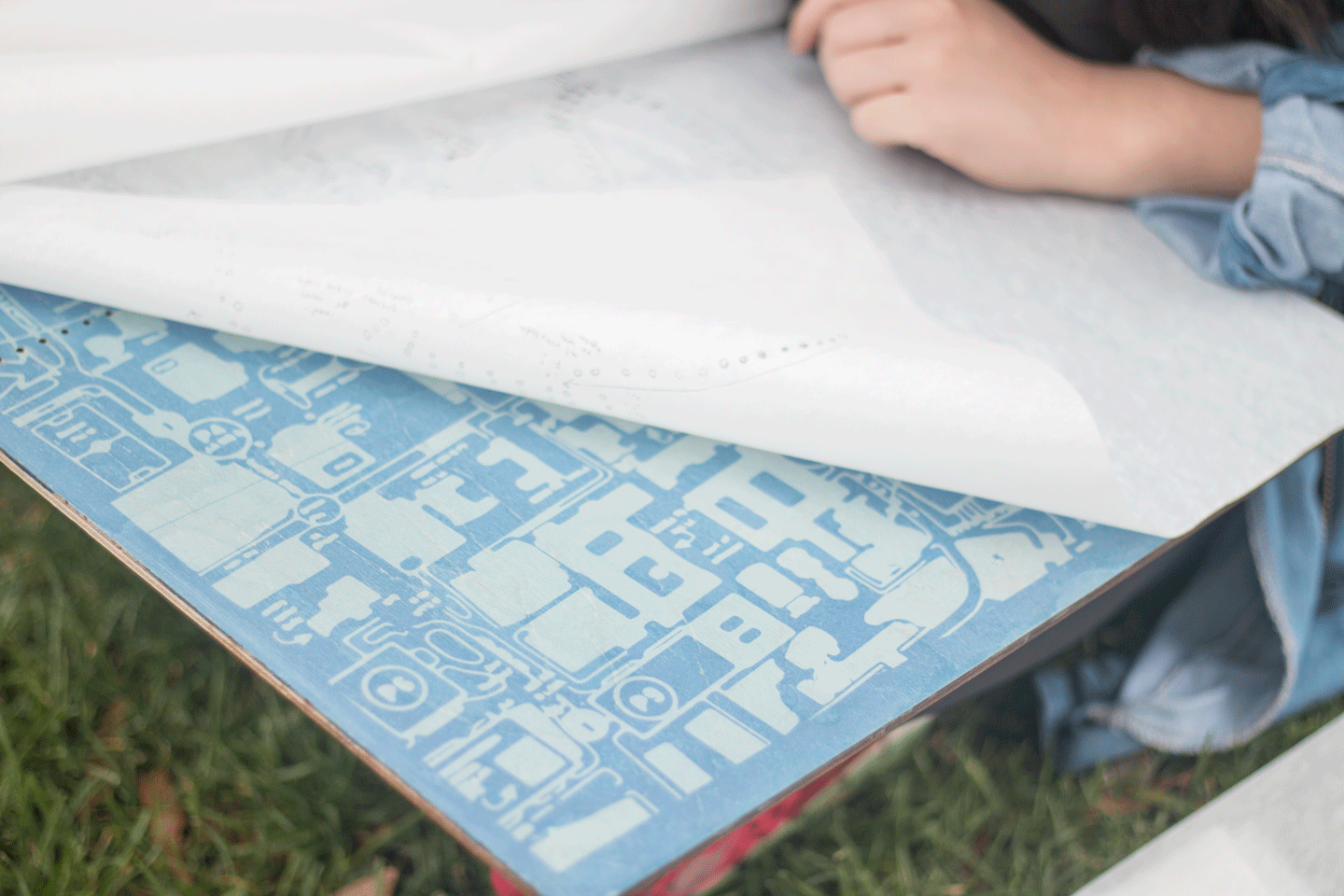 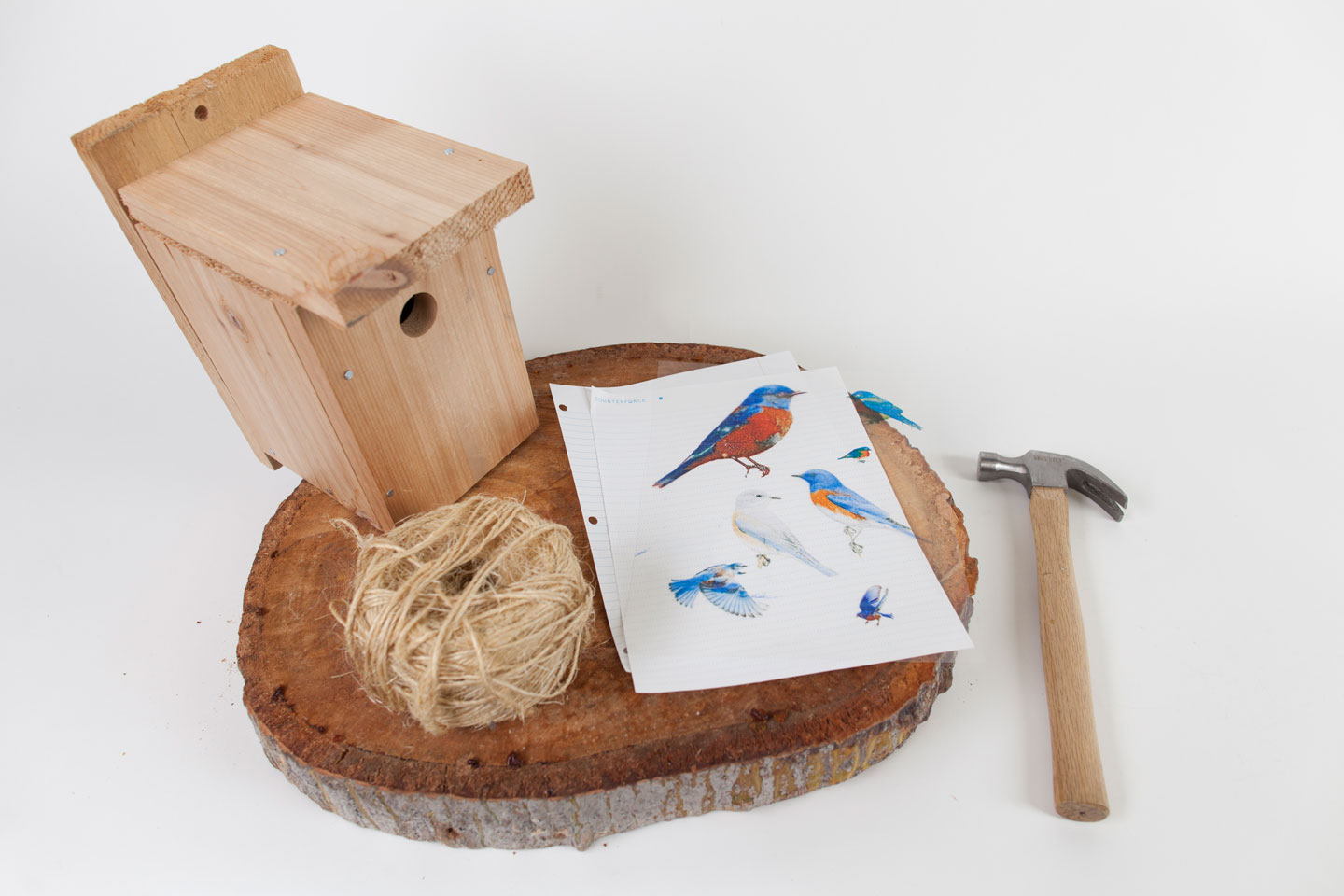 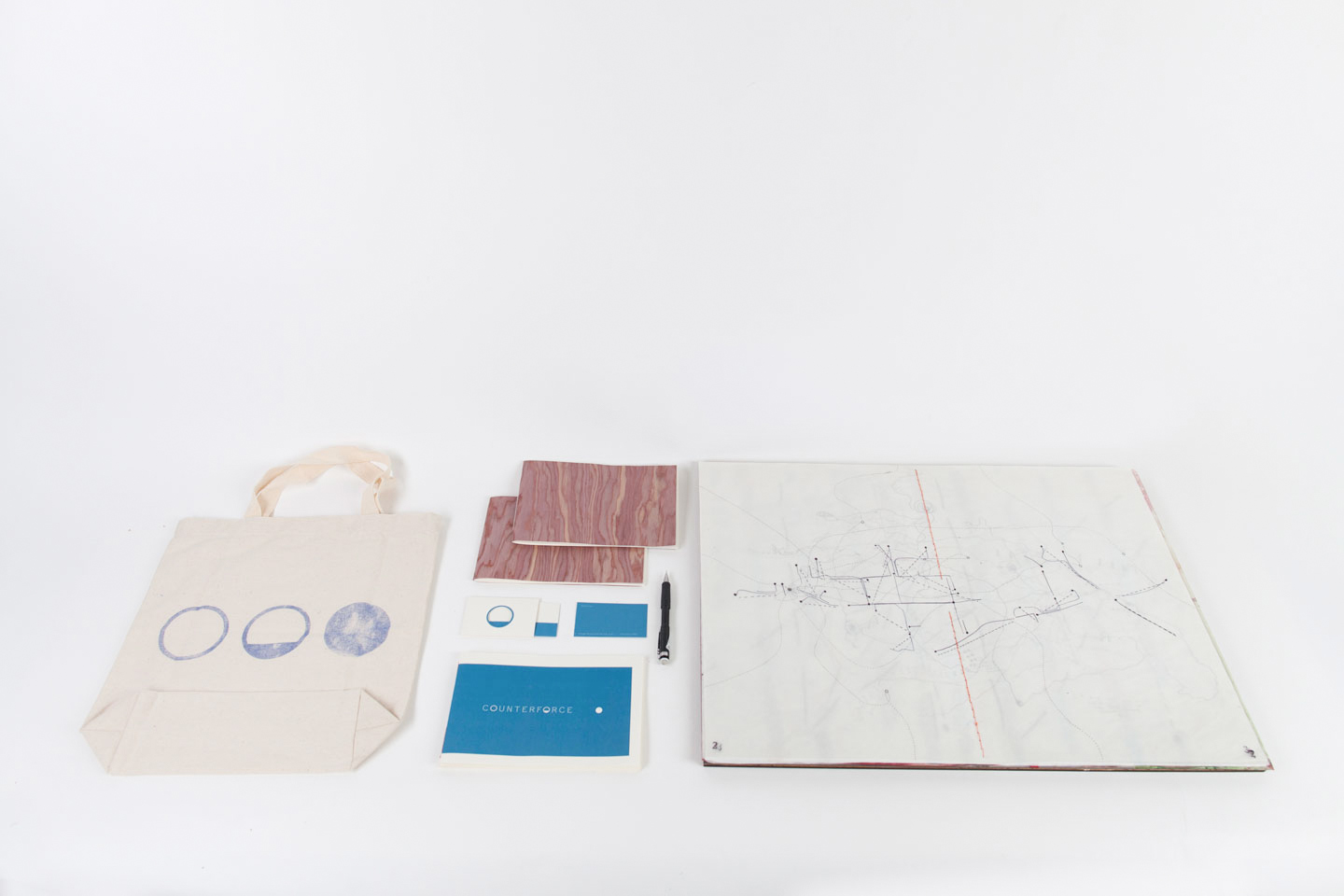 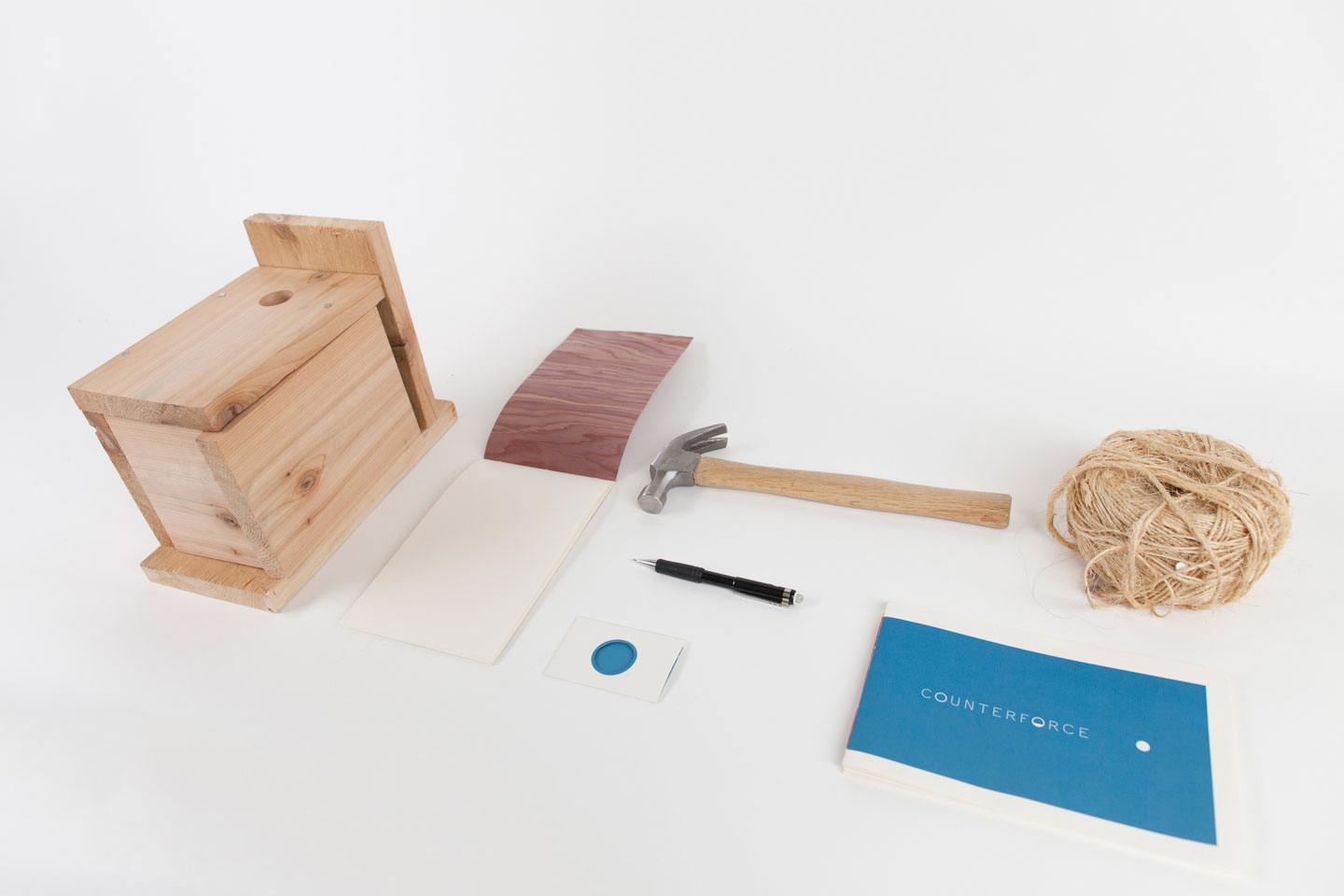 Visualizing the Counterforce brand, our team engaged in researching, developing, and executing a companion field-study project. Three carefully chosen locations across the Westwood campus in Los Angeles served as locations for bird houses that we built. These nest boxes served both as a means of shelter for local birds and also as a method for humans as observers to look more closely at their surroundings. Observations of the nestboxes were then compiled to create a mapbook. 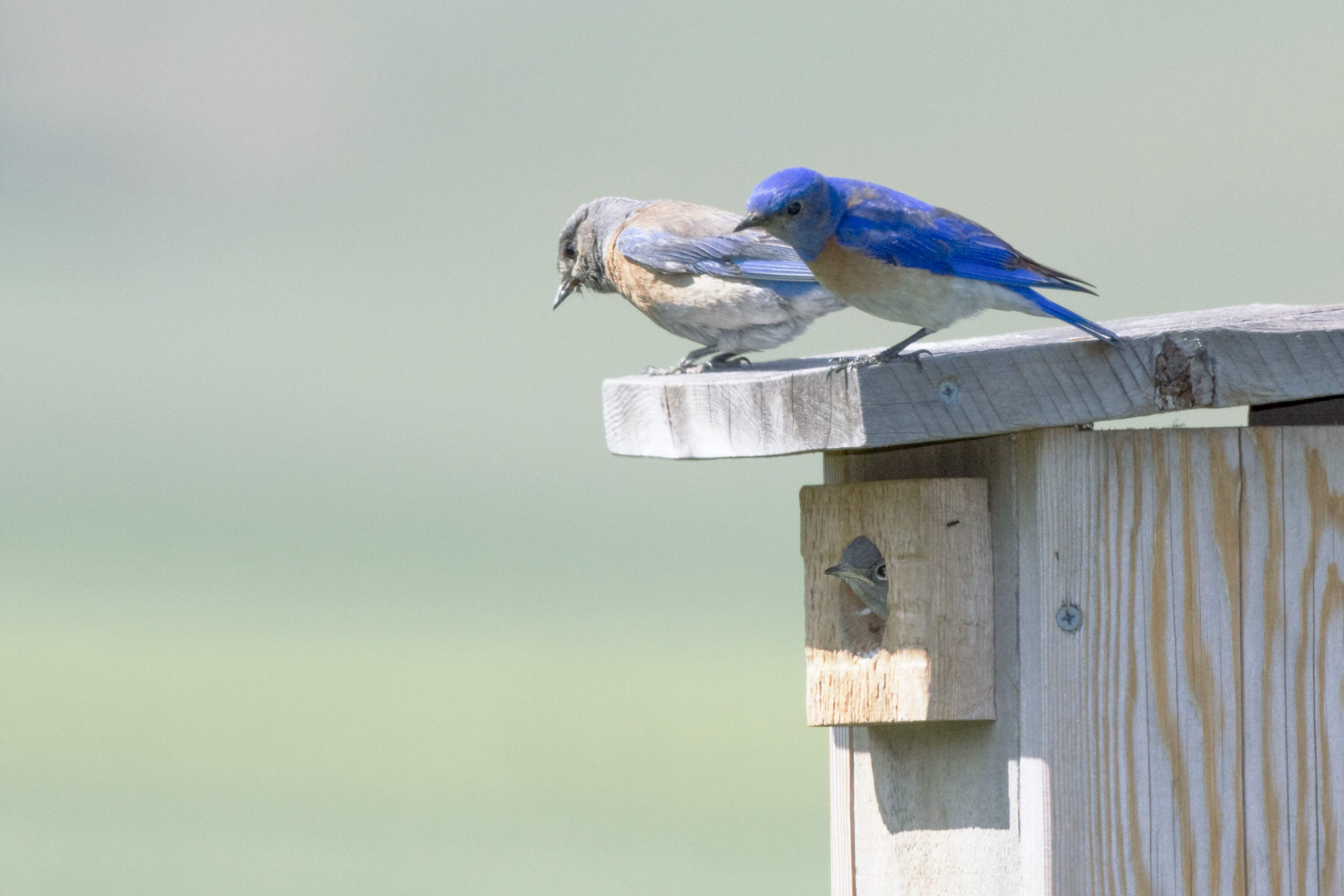 30 years ago in the Midwest, it was discovered that the number of bluebirds was diminishing because their habitat was being encroached on by humans. The trees in which they nested were being cut down and the bluebirds, reliant on cavities within trees, had nowhere to go. To solve this problem, nestboxes were created and put up for bluebirds. Since the western blue bird cannot peck holes into trees themselves, these human-made boxes allow them to forage and evade predators. Their numbers have been increasing ever since.

The nestbox provides a controlled and comfortable nesting space for the Western Bluebird. It may be placed up high so that it is safe, secure, and away from predators. Because the bluebird lacks the beak to create its own cavities, it normally relies on naturally occurring cavities within trees or abandoned woodpecker nests. As humans encroach on trees, these areas become less abundant. However, bluebirds are naturally drawn to the nestbox structure, recognizing the black hole as a cavity within which to nest and eat.

Nestboxes may be carefully removed in order to be checked for ants or improper nest materials (i.e. plastic strings) which become entangled with bluebirds’ legs. This allows humans to help bluebirds survive that may not otherwise survive on their own. The nestbox not only helps the bluebird to adapt to a harsher world where people populate more and more of their territory, they are also iconic and help to promote the presence and idea of the bluebird. Just as the nestbox itself promotes the bluebird, Counterforce may promote its cause through this remedial effort. 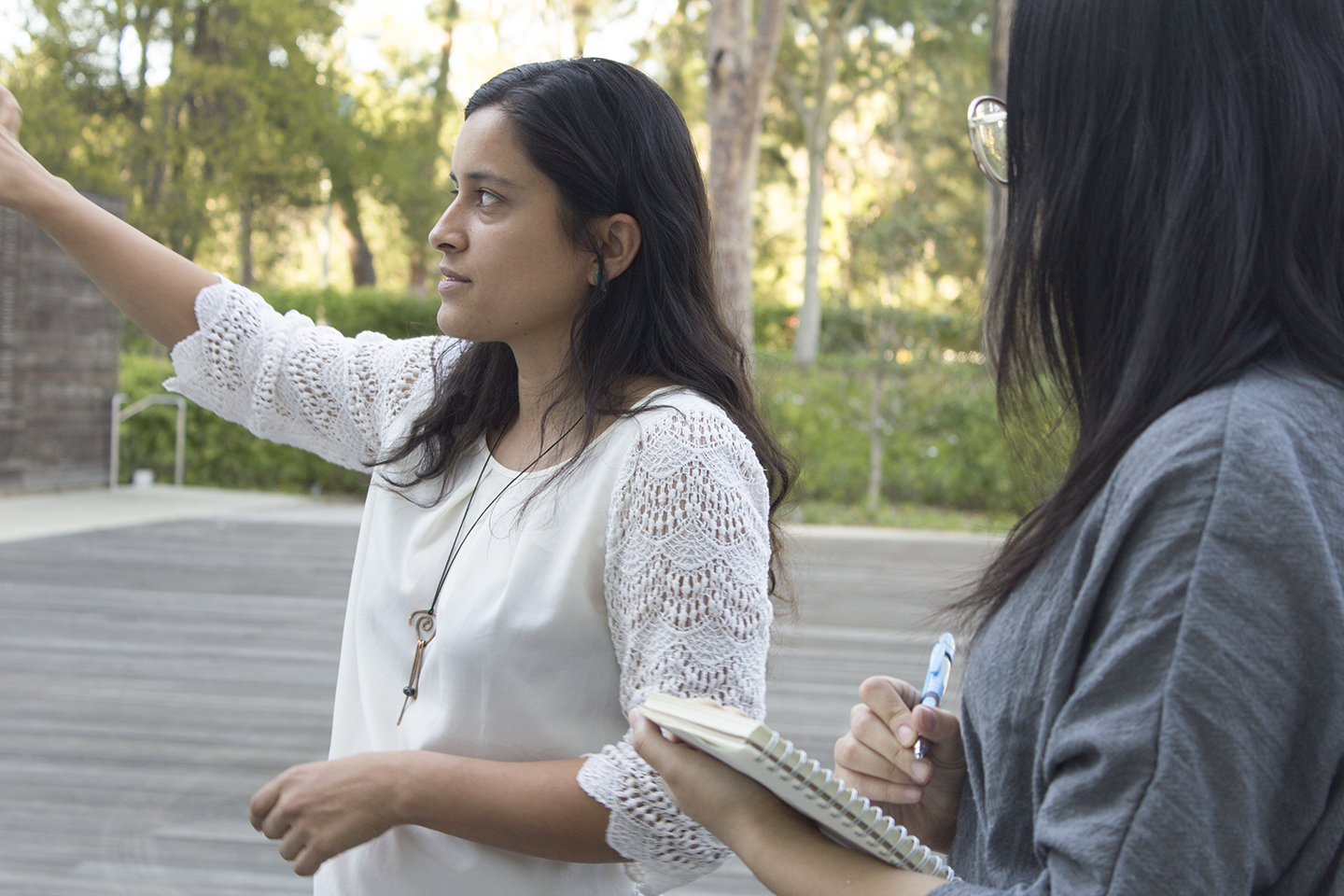 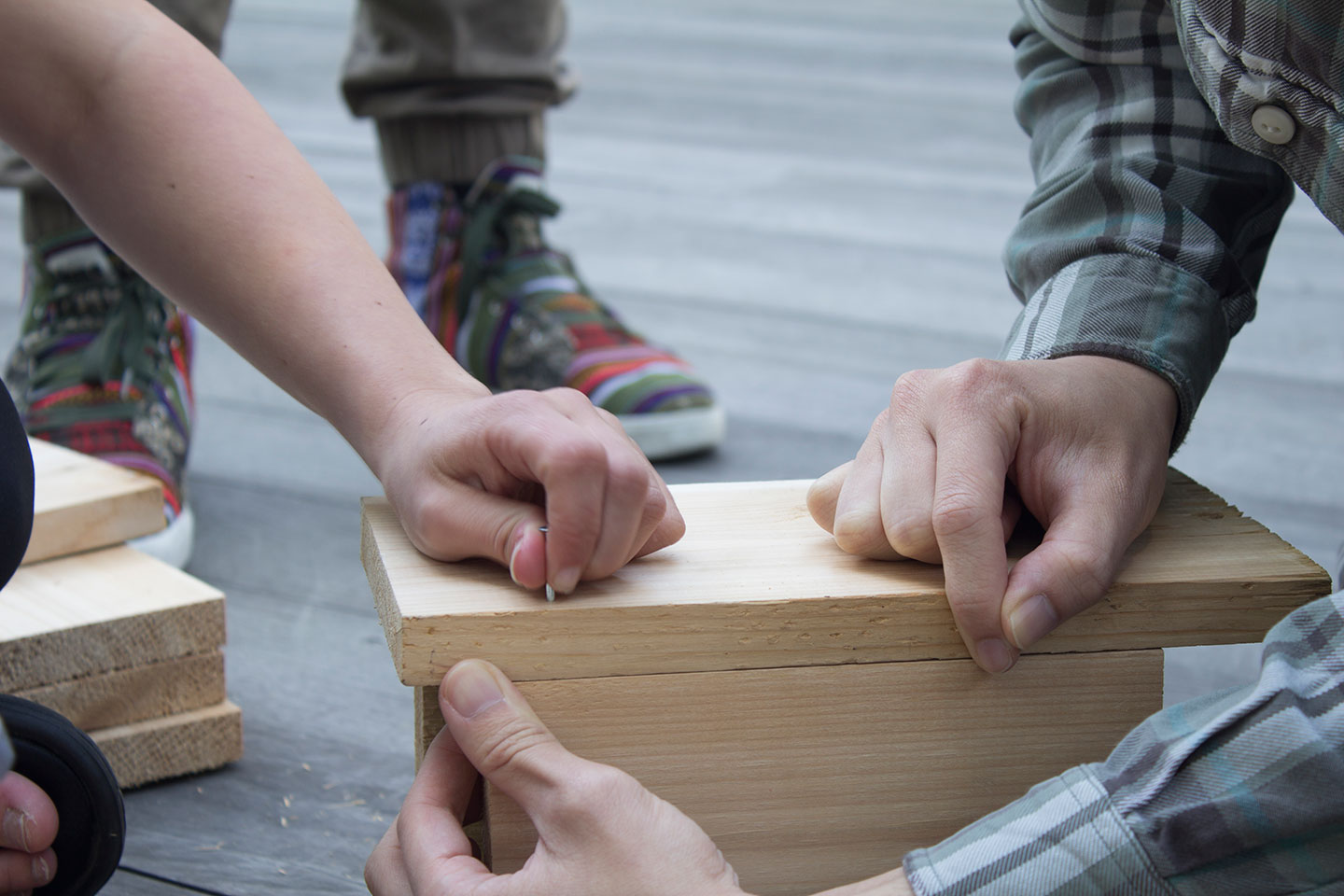 II. Constructing the nestboxes
We obtained red cedar, one of the most lasting and bird-friendly types of wood, from a local lumber store. The wood is cut to an appropriate size for the Western bluebirds. The planks are then hand-assembled by members of our team. 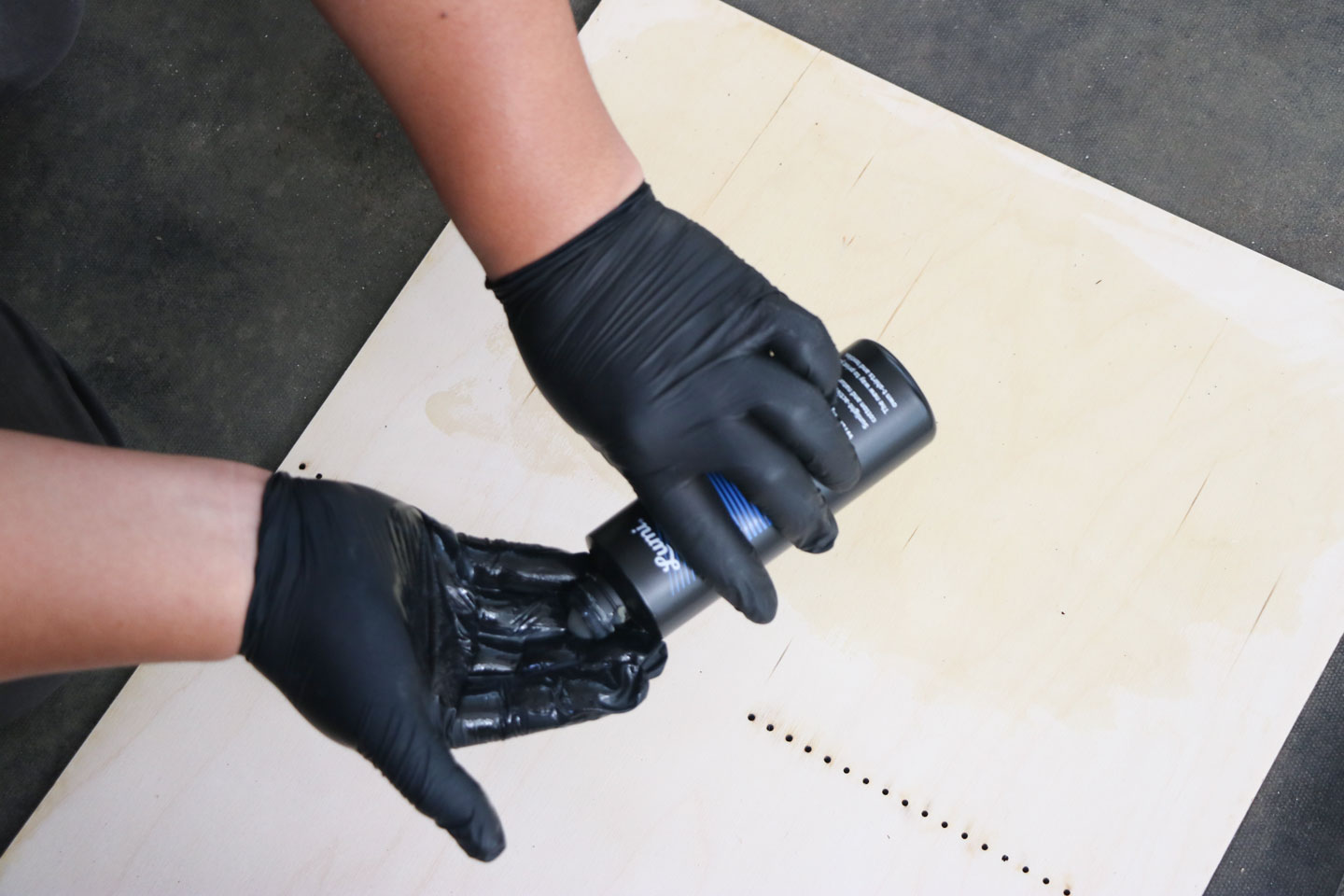 III. Cyanotyping the map
As a environmental lab focused on outdoor field studies, it was only appropriate to use colors that are activated by the sun. Cyanotype is a photographic printing process that produces a cyan-blue print. 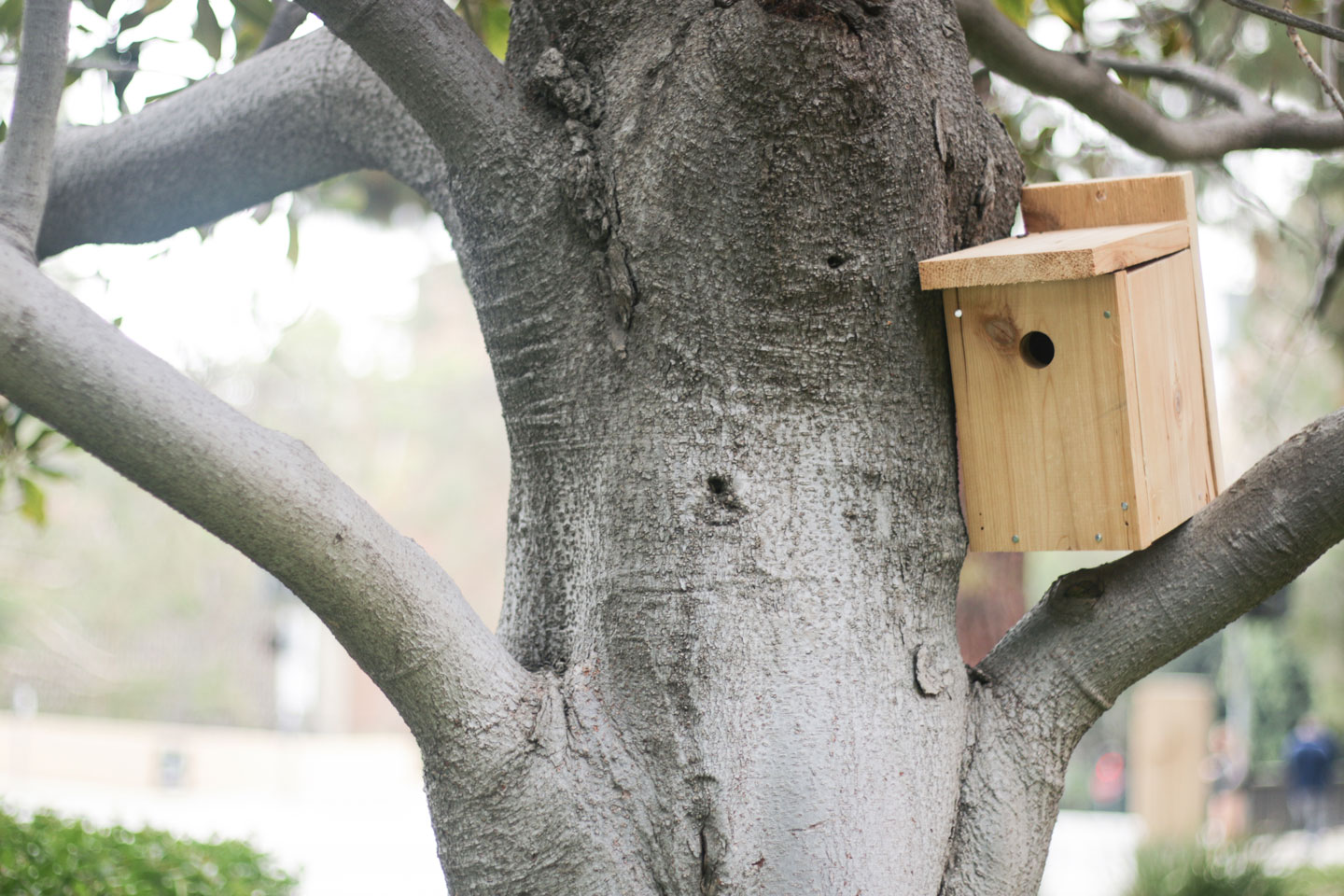 IV. Installing the boxes
Western bluebirds fly close to eye-level due to their diet for insects and preference for grassy plains. We scouted for locations that were close to ground, but not immediately reachable by passing humans. 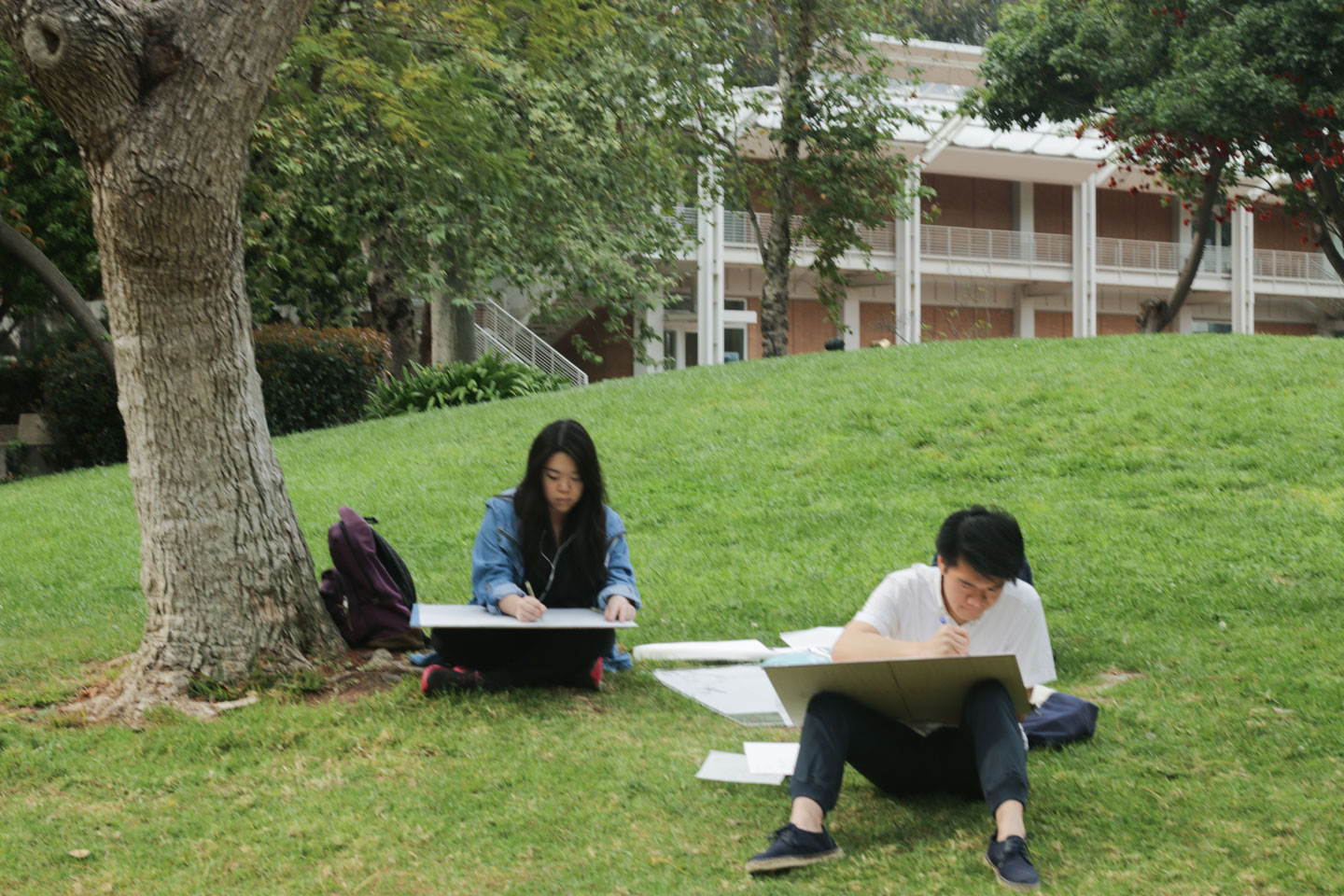 V. Observing the surroundings
Over the course of two weeks, members of the team sat down to observe the nestboxes and surrounding area around the Botanical Garden, Dickson Court, and Sculpture Garden. 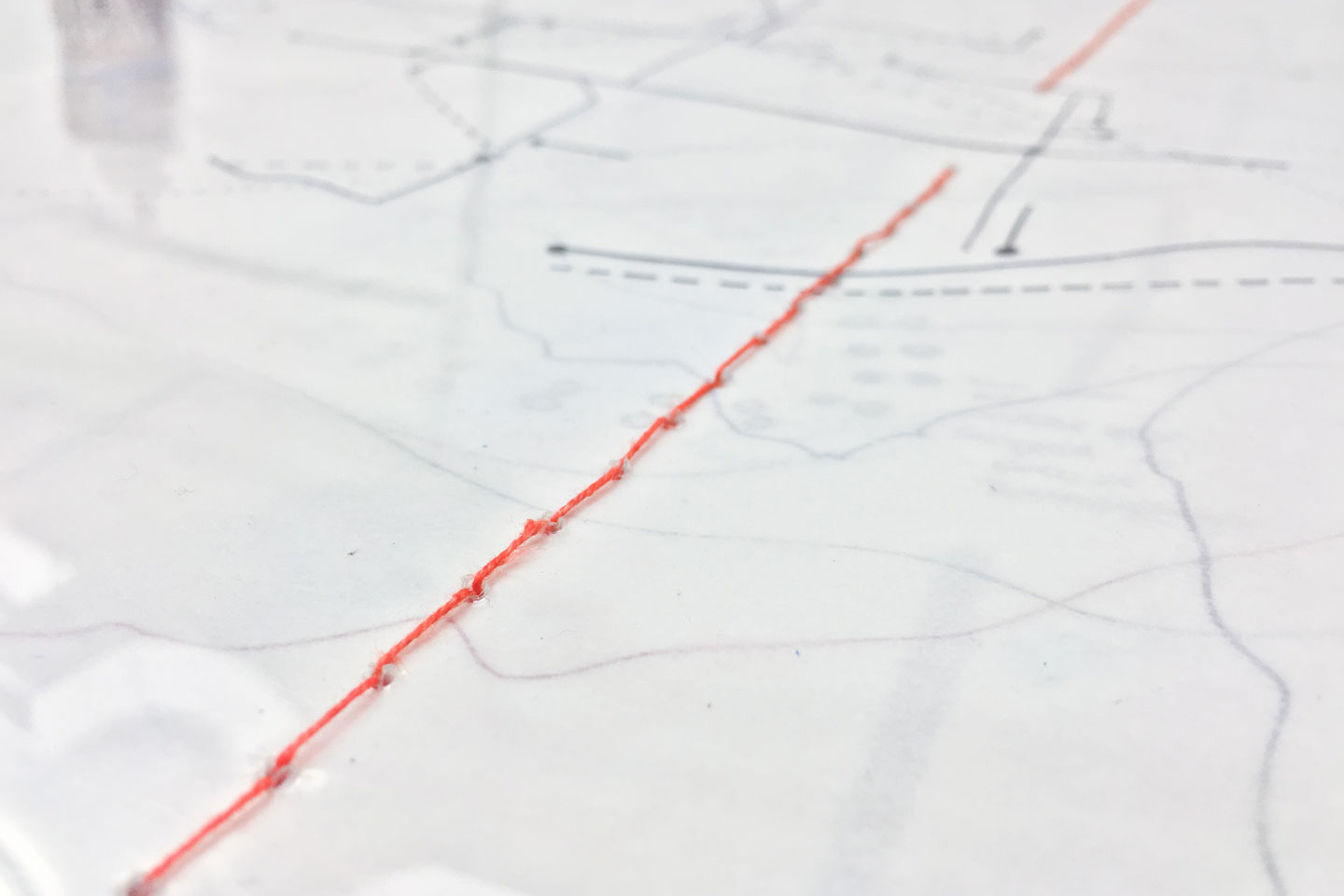 VI. Compiling the mapbook
The mapbook is bound such that new observations and drawings are piled and added on top, creating a project that never ends.

The Bird of Happiness Project is two-fold. In the first part of this project, three nestboxes were built and installed in the Sculpture garden, Dickson Court, and Botanical Garden of UCLA campus. With research and consultation from the National Audubon Society, the boxes were designed to provide the Western Bluebird with an optimal place of rest. The Western Bluebird was introduced to Southern California as a result of strategic placement of nestbox sites, guided from the forests and mountains to more urban and human-populated areas. Nestboxes increase the presence of the Western Bluebird in areas that otherwise may never see them. Nestbox building works as part of the Counterforce Lab’s initiative to facilitate a mutually beneficial relationship between the Western Bluebirds and the humans in the environment. 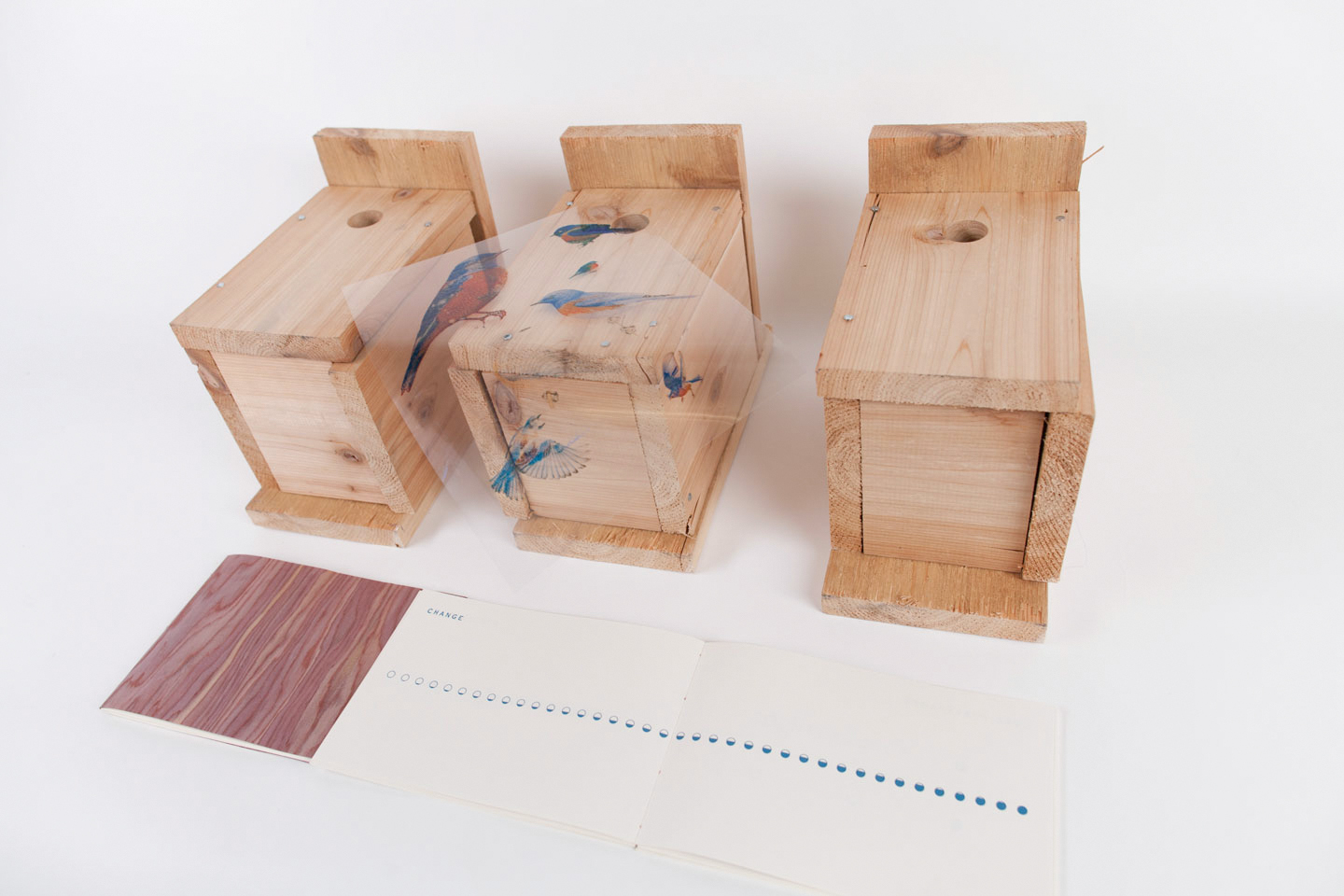 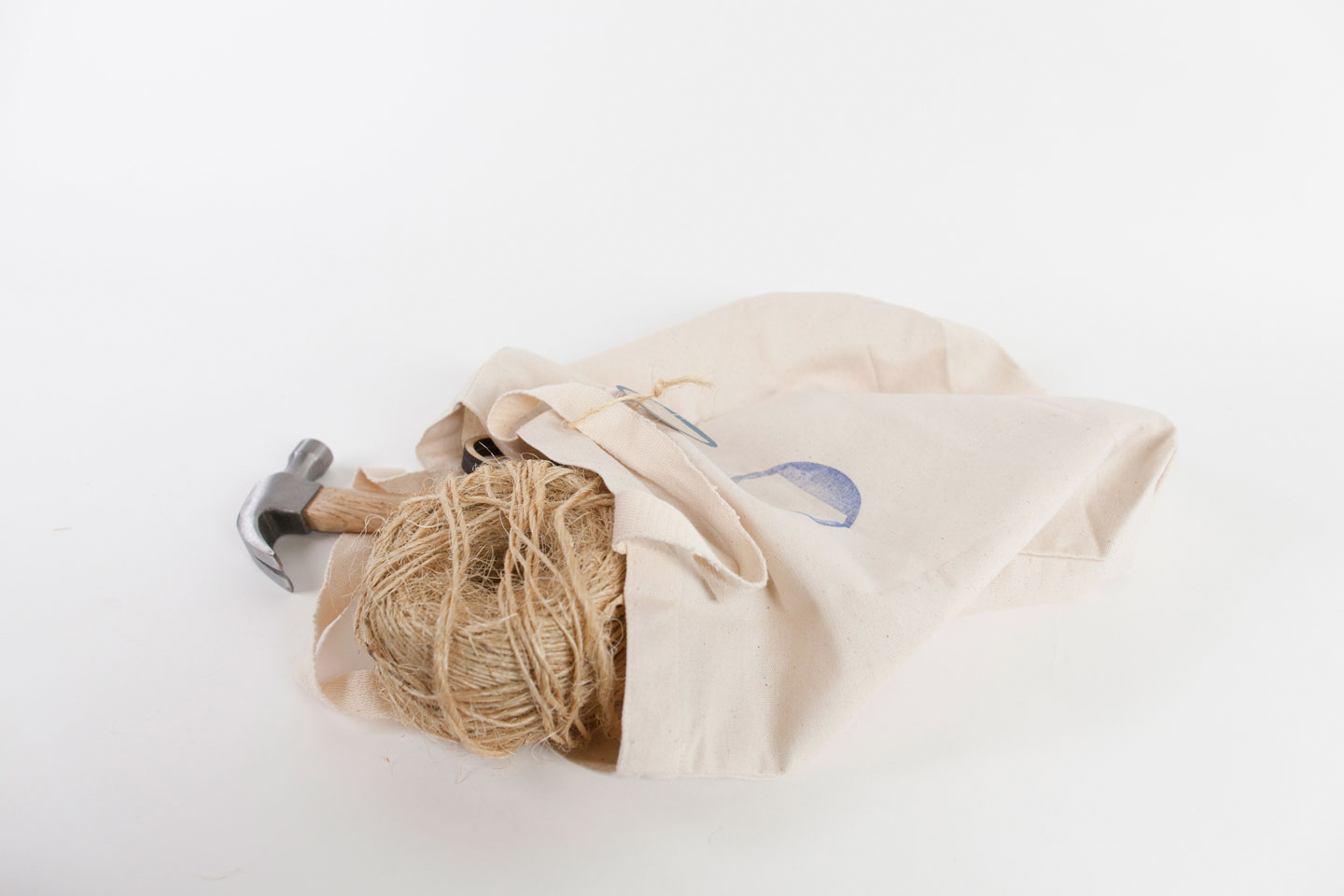 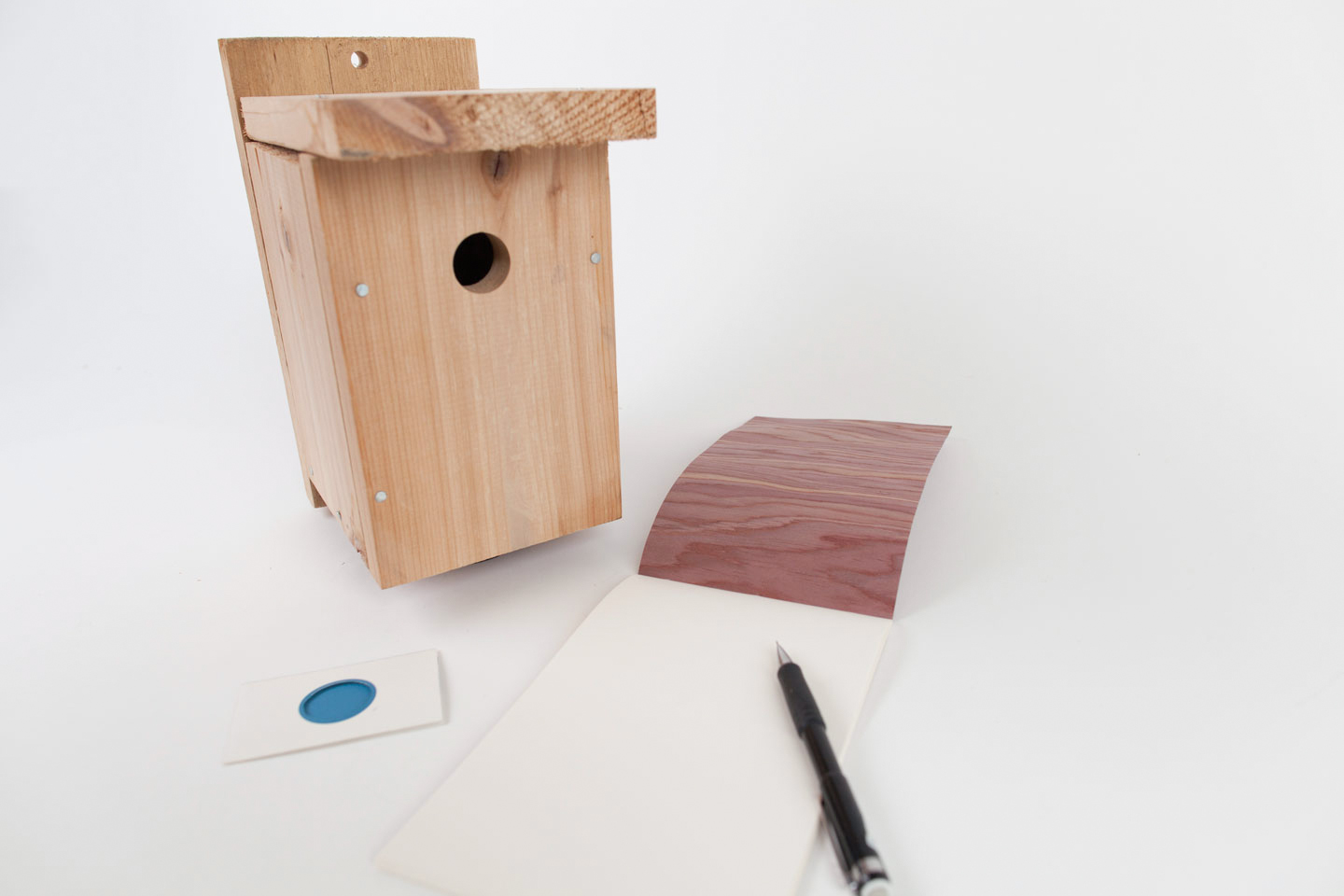 The second part of The Bird of Happiness project focuses on the relationship between the human as observer and the nestbox. According to Native American and Chinese mythology, the Bluebird is reverred as the bird of happiness. Galvanized by this optimistic viewpoint, Counterforce members engaged in a series of observations on the installed nestboxes and its surroundings, in hopes of finding “happiness”. In the locations where nestboxes were planted, six members documented the local activity surrounding the nestboxes on different days at different times. While the Western Bluebird may not live in boxes at the time of the observations, this interaction reminds the humans of the different coinhabitants in the shared environment. The current observations serve as the starting point for members of the local community to also contribute as both good neighbors and observers of local fauna. 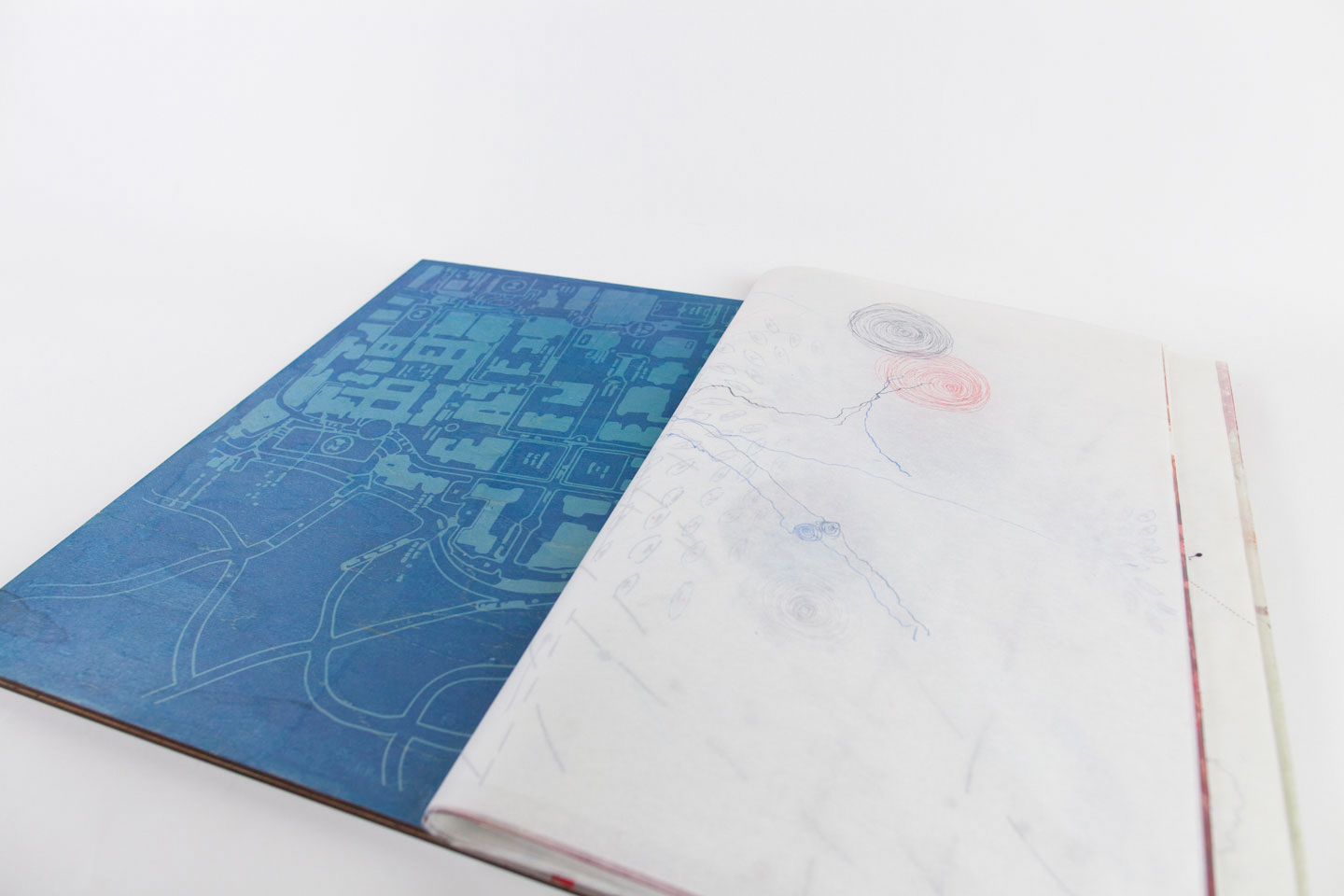 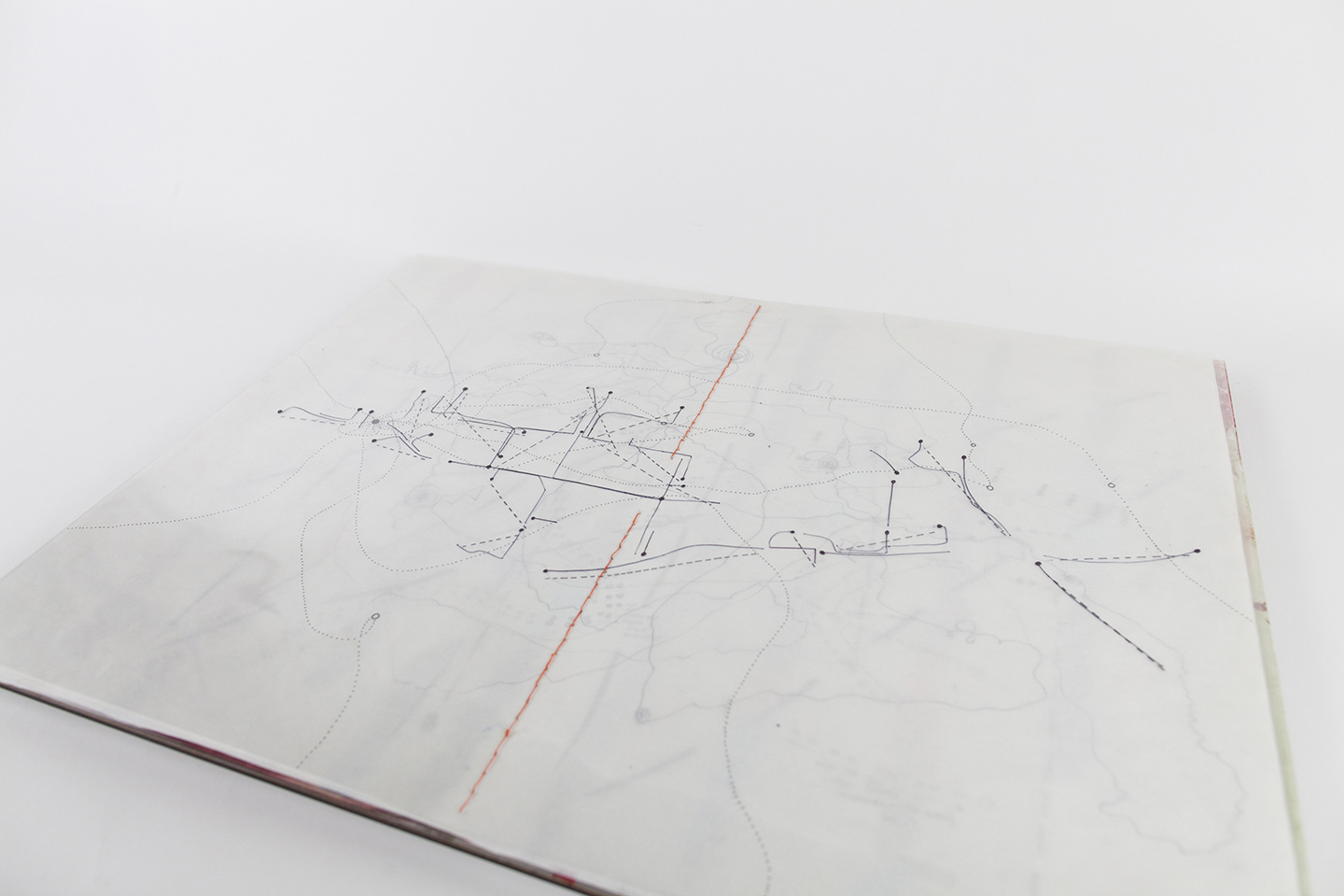 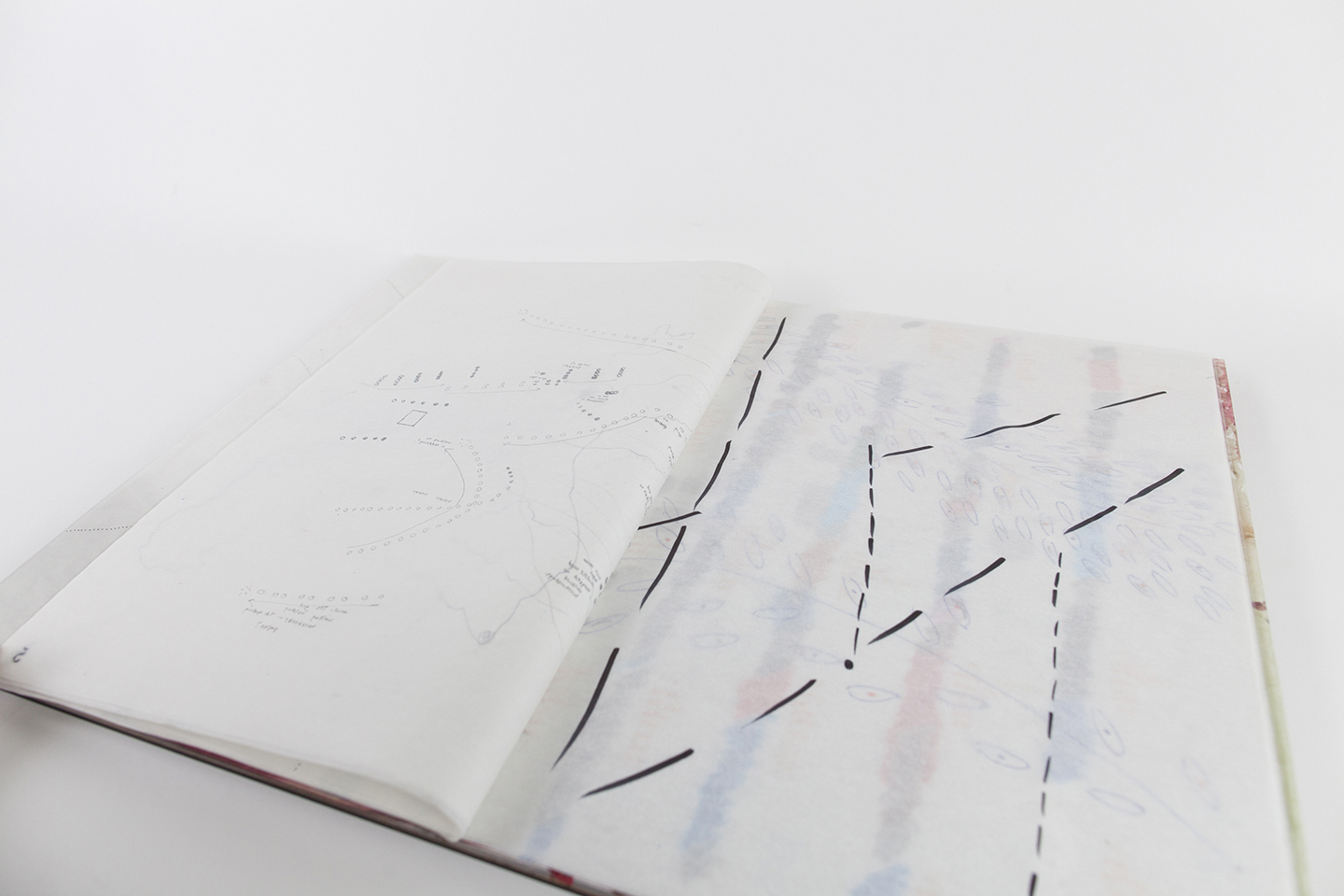 Kara: Documentation of leaves falling from trees and their projected path to the ground. The length of lines correlates to the distance away the leaves were from the observer.
Location: Dickson Court
Date: March 5, 2016
Time: 2:45PM 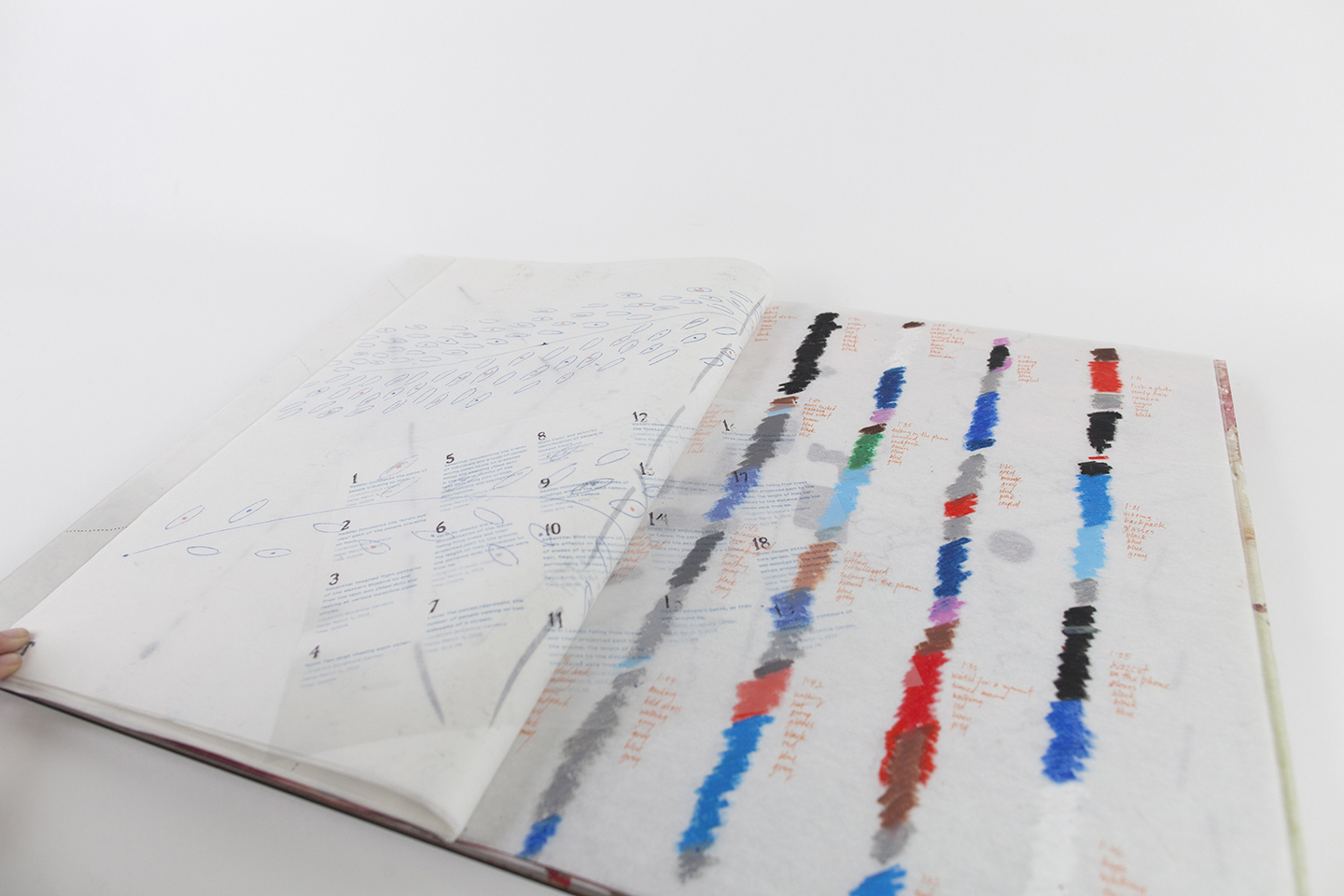 Bijun: Color identification of people in a similar manner as one identifies a bird. Observations of human behavior are noted with three to four main colors from the individual's hair, dress, and carried items.
Location: Botanical Garden
Date: March 3, 2016
Time: 4:30 PM

Maddie: Documents the outlines of buildings around the UCLA campus. Samantha: Blind contours of the wind’s effects on the motion of blades of grass, branches, hair, flags, and other objects surrounding the nest.
Location: UCLA Campus, Dickson Court
Date: March 9, 2016
Time: 4:00 PM 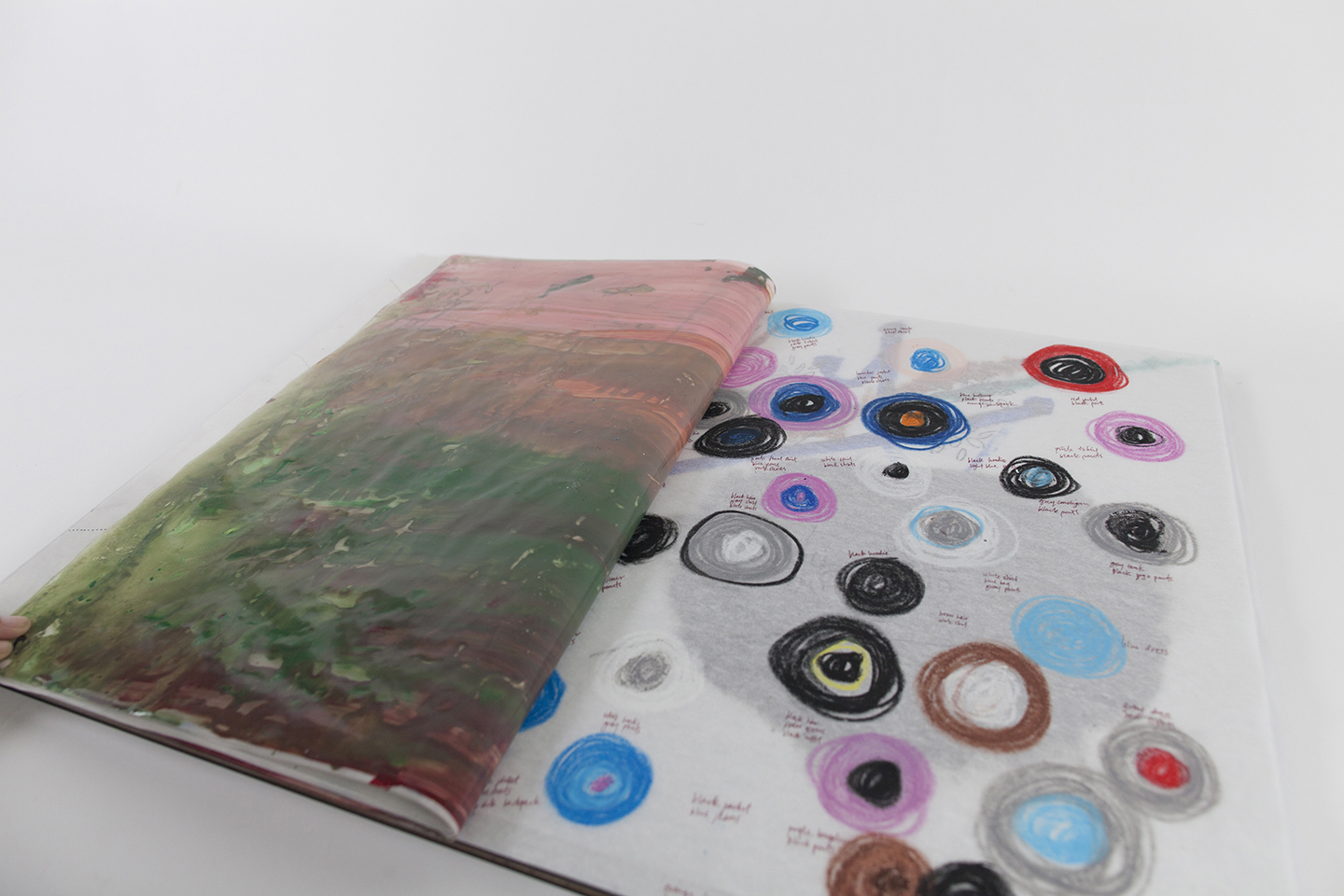 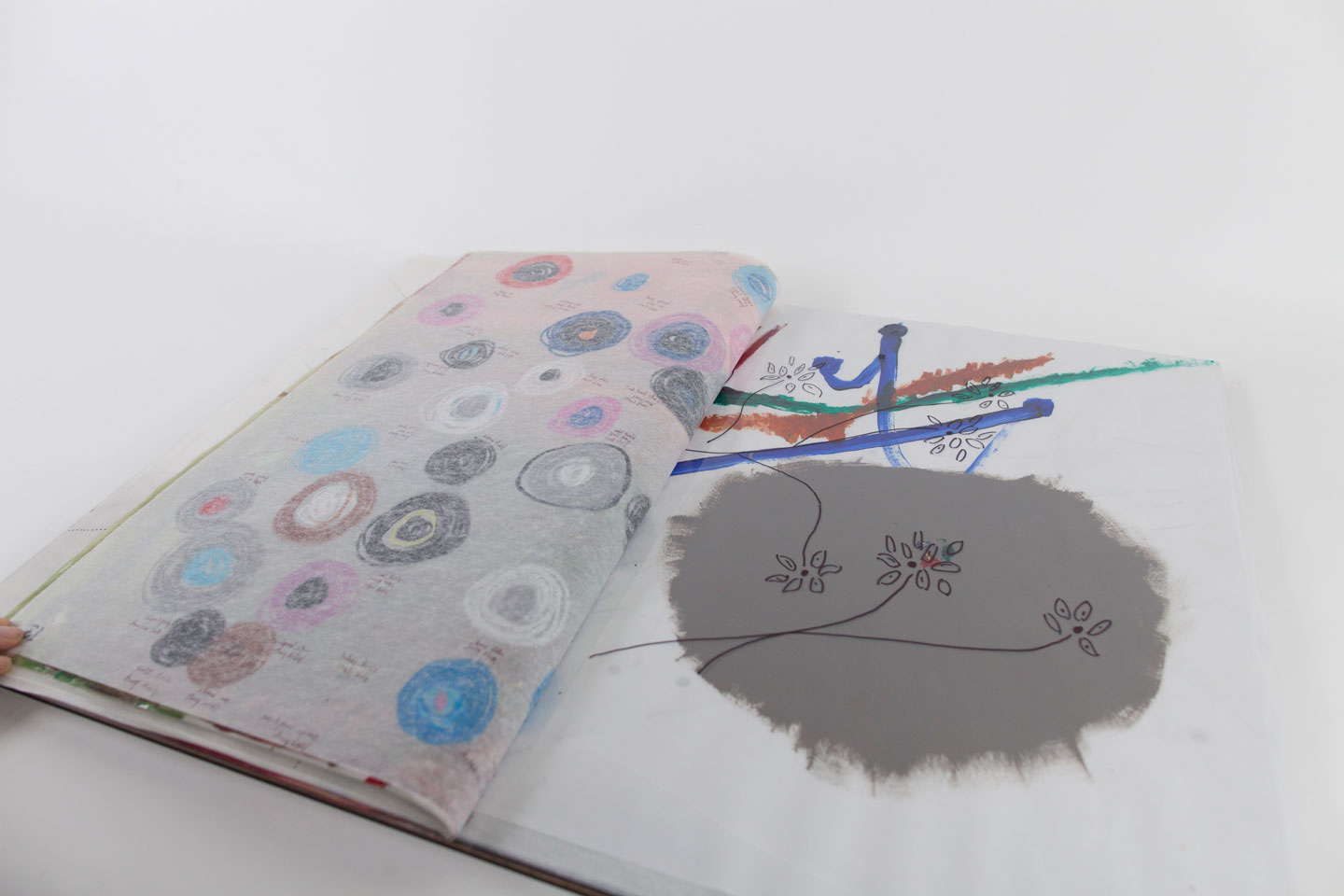 Louis: UCLA employees setting up tables. The path is drawn by a line, and the petals represent the chairs they placed around a table.
Location: Dickson Court
Date: March 4, 2016,
Time: 2:45PM 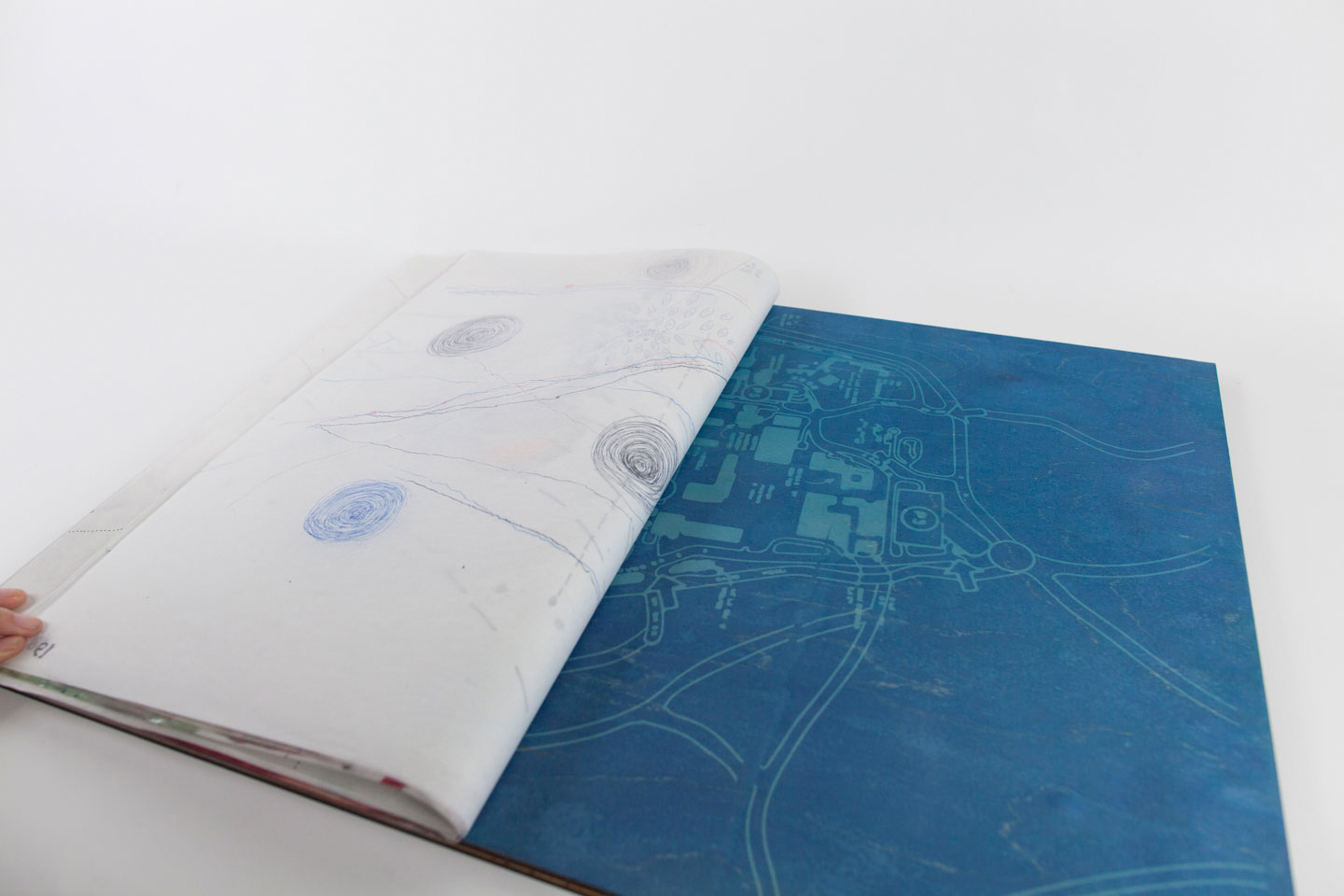